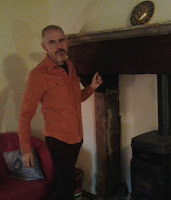 The questions started out all very innocent, 'Are you a Catholic?' I clicked the 'No' option. I didn't even know why they were appearing. Vanity compelled me on. 'Do you believe in God?' There was no 'well er...' option, so again I clicked 'No'. I liked this game. Much better than the Bubble Witch Saga. I understood this one and, there were no wrong answers. The display of thumbnail pictures to right changed a little. Questions came thick and fast. And with each answer the thumbnails changed. A light went on at question thirty, “Would you have sex on a first date?” There were no options for 'I'm a bloke you numpty, it's self-evident', or 'I'd wait until later rather than cause a fuss in the restaurant.' Apparently I've joined a dating App. The Galaxy is trying to organise my love life. When I first switched it on it began talking behind my back and swiping information from any Samsung device in range. It's siphoned my Facebook profile and is putting it about Arezzo. Every answer ruled out one market and opened up another. I know because Cinzia, Elena, Daniella and half a dozen ladies of a certain age have seen my profile and are barking up the wrong tree! That's what happened. Honestly your honour.

Anyhow, here's some post-modern self-referential bloggery. A peek into my mailbox.

Is Jonnie Falafel your real name? What's this? The Spanish Inquisition? My real name is Alfonso Maria Torquemada. That had to go? Pestered night and day with a name like that! It's what happens when your sailor dad gets extended shore leave in Santiago. Dark eyebrows and salsa dancing skills? Those genes didn't emanate from Wolverhampton.

Why Italy? Classic mid-life crisis. Too many programmes of the 'No Going Back' ilk. (Actually, they've mostly all gone back!) Over-indulgence in 'memoirs' like Annie Hawes Extra Virgin about Liguria or that ex-Genesis drummer guy who wrote Driving Over lemons about Andalusia. Mind you even the guy who wrote TheDark Heart of Italy still lives in Bologna after twenty years and sings the praises of the Italian caffè.

Do you miss England? Depends which England. The rolling hills of the Yorkshire Dales. Riverside walks. Lively market towns. A good pub. The eco-socialist republic of Hebden Bridge. The ease with which things get done. Transparency of social situations. Complex conversations. People. I miss all those things. You can keep the coalition government, cutbacks, TV and the dull uniformity of towns and cities.

Have you thought about writing a book? Appeals to the ego! An alternative living would come in handy too! Alas nobody wants to pay anyone to write any more. The print market seems to have dwindled to a handful of gazillion selling authors and Amazon has depressed the price of books so much there's not much back-wash to authors. I know hand held devices are the in thing, but I haven't looked into electronic publishing beyond reading a few articles about it. Writing isn't going to remedy anyone's economic straits.

What does 'slow food vegan who knows you can't get an ought from an is' mean? Slow Food principles say food should be Good, Clean & Fair. Good, in the sense of good quality and healthy. Clean in the sense of grown with minimal or no use of pesticides & herbicides. Fair in that it should pay the producers and distributors a living. Carlo Petrini founded the movement to counter corporate food culture obscuring the connections between food production and consumption.

More than a decade after reading Slow Food, my thinking is more complicated. To begin with I mistook it for the 'Italian Way'. This isn't so. Whilst traditions of production are stronger here, especially in Tuscany and Umbria, the general trend is towards the same methods and bland-out of Northern Europe. The problem of earning a living that small producers face in say, Yorkshire, exists here too. And I tut-tut at folks shopping baskets almost – but not quite - as much as I did there! I can't claim the moral high ground. I love my Turkish tahini, Dutch peanut butter and Argentinian avocados! Generally speaking, the influence of the movement is exaggerated.

Some elements of it are deeply conservative; about keeping a 'closed shop' on certain products or methods (although I do understand that DOC classifications are one way producers can maintain a living). I admire the the Genuino Clandestino – groups of young farmers and producers whose guarantee of quality comes from the fact they they are local enough to know and that you can visit and check them out when you want to. Most simply cannot afford to buy into the organic or DOC closed shops.

I looked at animals, domestic & farmed (I mean farmed too! 'Farm animals' is a euphemism). They have central nervous systems and an anatomy and physiology quite like mine. It didn't seem rational that they couldn't feel or suffer in similar ways. A sort of suffocating panic came over me when I thought of the industrial scale of the suffering and the slaughter. We are lucky enough live in a time and place of plenty where, as an omnivorous species, we have the luxury to choose what we eat. The penny dropped nearly thirty four years ago. You don't have to participate.

Is vegan what you are or what you do? The dietary practice of eschewing products of animal origin? Or something more? Veganism is just one response to the industrial scale suffering of animals. One manifestation of the urge towards compassion. Anyone doing anything to tip the balance in favour of compassion should be applauded and encouraged. Indeed, in utilitarian terms it's perfectly possible for a meat eater to do more to alleviate animal suffering than a dietary vegan. 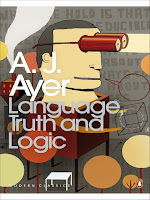 I'm not the perfect vegan. If someone slaps a lump of butter in the middle of my risotto I eat it. Vegan not possible - default to vegetarian. Take the Paris Exemption. Animal rights philosopher Peter Singer does. Jeffrey Masson does. A lot of vegans do.

There's a general confusion about matters of fact and matters of value. For example, it's argued that because we have canine teeth we are designed to eat meat. Others counter that because we have a long digestive tract we are natural herbivores. But even if we were designed to eat meat, it doesn't automatically follow that we should or ought to eat meat. We might equally conclude that we should suppress our nature in order to alleviate animal suffering or for some other moral reason. Vice versa for t the long tract persuaded. The ought doesn't logically follow from the is.

And sometimes a reader writes for advice.....

I'm thinking of moving to Italy.... Come and stay for a few months. Maybe try out some different settings, learn a bit about the culture and language, look at work options. Then retreat to a safe distance and make a rational decision.

And it's not all flattery...

Your tone is very cynical. I would admit to being sceptical. I enjoy irony. I'm the same person I was in England and I didn't Pollyanna around in a beatific haze saying all was rosy in the garden there either.

Your views about Italy are ignorant and bad mannered. When I write about iniquities I can be ill-tempered and bad mannered. Foreigners have different perspectives. For example, Bill Brysons travelogues of Britain are entertaining because he's an outsider. Insiders sometimes don't see the wood for the trees. The lake of my ignorance is much deeper and wider than the puddle of my knowledge. This isn't modesty, but the human condition. I prefer it when someone makes this kind of criticism if they would tell me on which points I am mistaken. A real exchange of views is preferable and I might even be persuaded. Everyone is free to comment on the blog. I moderate the comments but all views are welcome. I remove commercial content if it's not relevant.
Posted by Jonnie Falafel at 16:47