Authenticity: It's The Real Thing

Authenticity is an ephemeral thing. It's like grasping air, the goal always falls short of the reach. What is the longing for and what does it mean?

“It increases your cancer risk by 30%”
“What does?” I asked suddenly tuning back in. 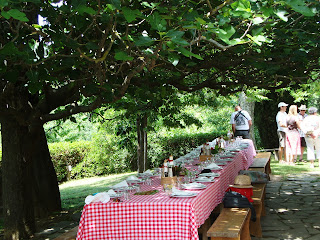 “Wood-smoke. Had to keep the windows closed all day.”
“Oh, all the octogenarians around here will be concerned to hear that.”
Same guest was earlier extolling the virtues of wood-fired pizza, “the authentic way.” Personally I relish those perilously carcinogenic charred edges: the frisson of risk and derring-do! But trust me, you can achieve this in an electric oven, although the flavour will lack the gorgeous phenolic smokiness that wood imparts.

It got me thinking about what a slippery customer authenticity is though. In a world scraped flat by the rollers of corporate juggernauts – where you can get the same Pizza Rut pizza in identical surroundings in Dagenham, Delhi and Dubai – the soulless sprawling tentacles of uniformity are driving a search for authenticity. It's certainly a theme that crops up in the literature and attracts people to Tuscany and Umbria. Even Italians refer to this region as 'old Italy'.

Authenticity is an ephemeral thing. It's like grasping air, the goal always falls short of the reach. What is the longing for and what does it mean? Is it simply harking back to some apocryphal past? Those who extol the virtues of the simple contadini life, presumably aren't thinking about rickets, tuberculosis and high infant mortality? Paradoxically, these bucolic romances exist alongside and within the Tuscany that is a magnet for the wealthy. The buzz this week is that Hugh Grant is moving to Anghiari. Oh hum.

A few years ago I remember seeing an article in The Observer Sunday Supplement about Tuscany. The pictures were fantastic. Boulevards of cypress trees, clouds of lavender, old stone farmhouses decorated with cobs of corn, long tables dressed in blue gingham. It pushed every 'Tuscany' button, evoking some pastoral convivial idyll. Last year English guests Phil and Cath told us they bought Italian produce from Fattoria La Vialla Organic Farm & showed us a very beautifully and expensively produced brochure which was sent to them along with gift packaged samples. I recognised the place from the Sunday Supplement and then I realised it was less than half and hour from us! A PR drive that saw features in foreign broadsheet papers? Elaborate brochures? Introductory gift packs? I was suspicious. This outfit could not possibly be Italian! We had to go and see for ourselves.

First thing I noticed on the car park were the rustic carports created out of branches with bamboo and broom roofs. That and the fact that they were rammed with German and Dutch registered cars. It was buzzing. There was a maitre'd directing visitors. This place clearly had it's act together! Very un-Italian. Then, in spite of my diminutive stature we were greeted in ..... German! We caused a bit of a kerfuffle by replying in Italian - our German not being up to much. She switched to Italian.

We were directed through to the outdoor café past a great mushroom shaped haystack and a 1940s pick-up truck so highly polished and manicured it was clearly a prop. Hens bobbed and begged for crumbs around the café tables. The scene before me was that Sunday supplement spread. Theme-Park Tuscany. Or so I thought.

We had a walk around the olive groves where the air was heavy with the fragrance of thyme and lavender along the paths. The groves had modern piped irrigation systems and, looking into the buildings, there were stainless steel mills and storage tanks only thinly disguised by the ubiquitous dried broom and bamboo. There was a serious business here. We passed the long tables set for lunch on the terrace of a large attractive farmhouse and stood on the steps looking down the wide gravel path lined with cypresses. It was a delight to chance upon a couple of grumpy mules taking dirt baths – straight out of Don Quixote! Then we wended our way back to the café through great clouds of lavender. This place was so charming. It couldn't be for real.

Back at the café we had a light lunch to sample the produce. The Olive oil was to die for. The depth of colour, cloudiness and the sharp peppery notes told me this was a first pressing. No doubt about it's credentials. The bread was heavenly – it had that authentic smokiness with a robust crust and soft close textured interior. (For a second I grasped the meaning of authentic, then it slipped away.) The spelt salad and the dips made the meal complete. My friends ate the very substantial amount of pecorino with a look of ecstasy. I swept the crumbs from the table bringing a flock of friendly hens rushing towards us. Maybe it was the sun, or the scene or even the light refreshing vino bianco or a combination – but my cynicism was overthrown. We headed for the shop and bought everything we'd eaten... in industrial quantities!

I've returned half a dozen times since. I will never make my own Olive & Caper Sugo again – because I've got about 12 jars of theirs in my pantry! The Torbolone Organic Red Wine costs €5 a bottle but tastes like it should cost twenty. And I've since discovered that it is in fact Italian owned although to be honest I don't think I encountered a single Italian on the front line. Belgian, Dutch and German yes. Italian no. My friend in our village, Irene used to work there and tells me they do employ Italians. 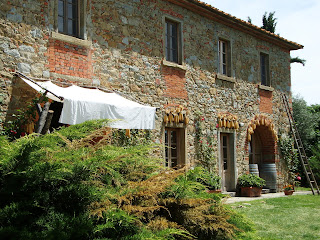 Olive Oil Barons
I recently read Extra Virginity: The Sublime & Scandalous World of Olive Oil by Tom Mueller which gave me an insight into the economics of olive oil production. Leave aside the corruption scandals which have dented the reputation of Italian oil; the markets are flooded with intensively farmed Spanish, Turkish & Greek olive oil which depresses the price to a level where people think twice about paying the price for the small production stuff. In Tuscan shops you see Greek and Spanish oil at €4 or €5 a litre sitting next to one literally from down the road at €11 or €12. The Spanish in particular have invested heavily in intensive cultivars and sophisticated storage. The Spanish oil you buy might be more than a year old and produced largely by machines. In contrast, the Italian oil will be labour intensive and fresh. You can taste the difference. Then it suddenly dawned on me. Fattoria La Vialla is successful because of the theatre they built around their products. The products work because the whole package pulls in the punters. An authentically modern way to preserve some authentically good tastes and traditions.