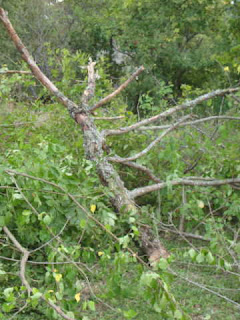 We are lumberjacks and we're okay.... We spent our weekend on the war against disorder - trying to whip this unruly landscape into shape. Cut to ribbons clearing thickets of brambles & roses which took revenge, springing out like razor wire with chunky thorns which tore my lip and Pauls nose. You couldn't tell the blood from the blackberry juice!
To preserve the weekend peace we used handsaws to cut down self-seeded oak and ash trees. The sheer physicality of the effort was exhausting, and although we began early to take advantage of the cooler morning, we still ended up soaked in perspiration and plagued by muscle tremors. For a while it looked like hurricane devastation with twigs and leaves scattered widely. We tidied up sawing and salvaging trunks for fuel, and gathering the rest of the debris into a high pile to make a habitat for all manner of wildlife.

We uncovered old vine canes & twine, brooms made from bundles of twigs and ancient makeshift shovels. There are some colossal wooden barrels in the woods and the side lanes and we discovered hand blown green glass demijohns a few weeks ago: all evidence of viniculture. Indeed, vineyards are often edged with roses since they are vulnerable to the same diseases as vines, which are manifest in the roses first enabling early treatment of the vines. I should add that we also found productive vines growing up oaks and birches but this means the grapes are suspended about thirty feet up!

Usefully we found that we need never buy roof tiles again, both kinds needed for the Roman cotto style were in the undergrowth in large numbers. We will “harvest” them in neat piles on pallets. Less welcome finds included: an old inflatable lilo mysteriously with cyrillic script on it, half a football filled with cement, wide bore plastic tubing, paint tin lids, some old blankets, partially degraded plastic sheeting, and a perfectly clean and legible address label for an architect in Modena.

Even in September the afternoons are too hot for toil & on Sunday we took ourselves to The Bio Cafe at Lucignano a gorgeous hilltown about 20 kilometres south east close to Monte San Sovino. As the name suggests, the cafe is organic and acts as a retail point for local organic producers. We're in a similar market so we thought it was time for apple juice and introductions. Our host was charming, plying us with Italian cider which was delightfully crisp and, as it was served in a flute, hardly distinguishable from Prosecco. No bad thing in my book! He was so full of infectious enthusiasm for the produce that we bought cider, vegan pesto, green tea & cantuccini. The cafe is not-for-profit and deserves support and encouragement have a look at http://www.biocafe.it/ for more information. Also consider Lucignano if you're in the area, it's nicer than nearby Monte San Savino which inexplicably gets all the plaudits.


Whilst at the cafe we amended our website http://www.vegetarianbandbtuscany.com/ & were thrilled to discover a very enthusiastic trip advisor review from a guest who stayed in the middle of August. She especially liked the food and referred to us as “chefs” which thankfully is not a legal title! Have a look at http://www.tripadvisor.co.uk/ under Tenuta Savorgnano. 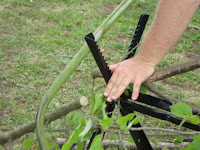 We returned at about six which allowed us a couple of hours work before sundown. We took out half a dozen more trees and simply laid them out on the car park for stripping later. Earlier we'd made a cauldron of wholewheat pasta, bean & vegetable soup with herbs and garlic which we poured over day-old bread and consumed in a trice. A night-cap of local dry Vin Santo rounded off the day.
Posted by Jonnie Falafel at 16:37