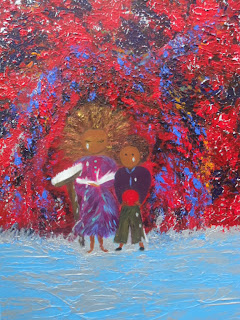 When some guests leave, it feels like to holiday is over for me as well as for them. This best describes the odd sense of loss that's repeated over and over as we've said goodbye to some remarkable people over the summer. Tidying and cleaning empty rooms almost becomes a ritual to exorcise the emotions, and as I scrub and polish I think of pleasantly memorable times - a convivial meal sharing stories, or the sound of satisfied guests chatting and laughing together as we wash up. And the memories linger, triggered by little reminders: a note in a guest book, a silver bangle left behind, donated novels or particular brands of soap and cologne, gifts of paintings and plants and even a florescent pink inflatable Pegasus which has hung for most of the summer under the pergola.


Trailers to this post mentioned an annual report to mark the anniversary of our arrival here. I gathered together some statistics for it, but they only tell part of the story. Here goes.


From March 18th until now a total of 453 nights (64 weeks) have been booked. This represents 73 individual bookings (29 for apartments/44 for B&B) with 154 people staying. Most people came as couples, but a handful travelled as family groups. Seventeen nationalities have passed through these doors so far: American, Brazilian, Danish, Dutch, English, German, Irish, Italian, Polish, Quebecois, Scottish, Slovakian, Spanish, Swiss, Belgian, Welsh, Luxembourgish (this is really what people from Luxembourg call themselves in English!) Over all the average stay was 6.2 days, but this is skewed by the fact that apartment bookings are usually for longer periods than B&B bookings and I didn't feel like trawling through the diary again to work them out individually! A slight digression, but it is worth noting that the shortest stays were for one night and the longest for sixteen.


Assuming a (conservatively estimated) 22 week season, this gives us a 48% occupancy rate. Is that okay for the first year? I'm afraid I don't really have a clue. I vaguely remember Ruth Wilson of Hotel Inspector fame (I know it's Channel Five and not Business Weekly!) saying that confidence in sustainability comes at about 70% occupancy. It would be nice to be able to make some of the changes we want to make a bit faster, but at the moment we'll settle for paying the bills.

The problem with figures is that they say nothing about the really memorable moments that cause us to refer to this season as our Summer of Love. Just for the pleasure of remembering, here are a few.